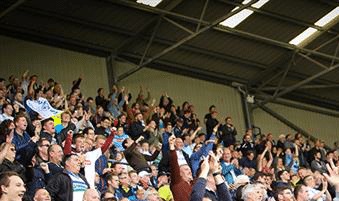 For some people it’s not really something you have a choice in.

You’re brought up with it. In England I’d say it happens more than religion. The choice is made for you at birth.

Take my kid brother. Poor lad never had a choice, what with me and his dad. I was desperate for a brother, whatever I said before we knew, because I wanted another white in the family. I mean, he dabbled in a bit of horrific Man U love, Beckham inspired, but as soon as he knew what football was he cherished one team.

Kid never even got to see what it’s like to support a good side. Hey, at least I had that luxury.

Indoctrination, you could call it.

And take my daughter. Middle of three, technically. Or eldest twin. Whatever. She would do pretty much anything to impress me, I think, so when I offered to take her to Prenton Park, boy did she bite my hand off. Ryan Lowe scored two and there, in her six year old mind, was the greatest footballer in the world.

I’m not proud of that. Well, yeah I am, actually. Under my roof you either don’t care, or you’re a Super White.

But she comes home from school telling me that she’s been chanting, “Everton is tragic and Tranmere is magic.” Oh love, I do agree. In theory, like.

But you know what. I had a choice.

My old man, he’s a staunch Liverpudlian. Born and bred in the city. But I didn’t like football. Well, didn’t like probably isn’t the right assessment. It just wasn’t as important to me as, say, knowing every capital city in Europe.

But we moved house in the summer of 91 and I made a new friend. His family were TRFC season ticket holders and they had a spare one game early in the season. He got to choose a friend and he chose me.

It would be fair to say he ruined my life.

“We support the reds in this house,” my dad said.

I have used that quote plenty of times myself over the years except the colour was white. One time my eldest came home from her aunty’s having been sick and was wearing a Liverpool shirt. Hey now. Come on. You don’t do this to me.

She was told, in no uncertain terms that this must never happen again.

I recently had a nightmare. I was on an aeroplane and a friend I’d not seen in years, a fellow white, was there. I asked the daughter of mine who hadn’t heard of Messi but would give his crown to Ryan Lowe to tell him who she supported. She said Liverpool. I awoke in a cold sweat.

Anyway. The point is this. My dad, he’s a red. A proper one, like. Now look, I’ll get to that later. Maybe. It’s a tiresome discussion in all honesty.

So yeah. He’s Liverpool. I showed no interest and then got invited to Prenton Park.

My memory is usually spot on but all I remember is we played Barnsley and won 2-1. I was captivated by being there more than I was the football. Same happened when my daughter fell in love with Ryan Lowe actually. She only knew he’d scored twice because I told her.

It’s all it takes, sometimes. Maybe if we’d lost I might have found it underwhelming? I doubt it but how could I ever know?

There was no looking back. Every Sunday I was glued to ITV and their Division 1 match of the week. Showed my old man solidarity by watching Liverpool games with him and rooting for them, for him. But my colours, they weren’t nailed to the mast. They were soldered on.

I mean you look at all the facts and I really should have been a Liverpool fan, shouldn’t I?

But hey. I chose my path. I’ve seen four play-off semi defeats, two relegations. Some mint cup runs, including a final. All ending in heartbreak. I started following us just after the greatest day in our history. I have never seen us win promotion.

Sure, I’d have had zero titles as a red. They saw their best shot go up in smoke six days before we went down. But, you know. A Champions League. Three FA Cups and I think four League Cups. A UEFA Cup. Hell, Charity Shields and Super Cups too.

I made the right choice you know.

Born in Birkenhead and have never lived outside the Wirral peninsula. Longest time I’ve ever spent away from it in one go is six weeks. It’s home, it’s where I’m from. They are my team, my representation in the English football pyramid.

What kind of glory is it if you don’t feel connected?

The old man always tells me I support the right team. I’m a ‘Birkenheader’ so I should be a white.

Hey, I’m not saying it’s the only way to choose a team. I make no judgement, not anymore. But for me, and this is just me, I couldn’t feel the same pride that I do, if I didn’t feel so attached, so part of it.

Unfortunately the same goes for the pain. And I know all about that.

It really isn’t much cop being a Tranmere fan. But that mate who invited me? He didn’t ruin my life. He made me who I am.

I wake up every day proud that I support Tranmere Rovers.

Thanks to Martyn Corrin for this