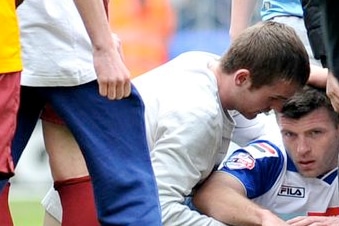 I couldn’t tell you what time it is exactly. I’ve launched myself onto my bed face down and I’m finally taking it like a little boy.

Been the kid who was moved tables in primary school because I talked about the whites too much. Been the nerd nobody liked until my season ticket had vouchers that could get a priority ticket for the League Cup Final. Been the home and away guy, come rain or shine. I’m talking LDV Vans away on a Tuesday in December, or Bournemouth and Torquay away on no sleep. And then – now – I’ve been the guy who puts family first. You don’t love the club any less. You just love other things more.

But right now? I am 6698 miles away from home, or so the ‘Find My Friends’ screen print my wife sent me tells me.

So let’s jump back. Twelve hours or so. Maybe more. As I said, who knows what time this memory was imprinted at. That feeling upon waking. Like four years prior. Under the sponge man. Like now, we were relying on results from elsewhere that day but, and it’s a big one. Maybe even worth a however. But we were playing Stockport County. You may remember them, they used to play in what’s now the Championship before mismanagement on multiple levels took them all the way to the Conference North. So that day, I definitely don’t think I felt like I do on this day.

Plus that day, we had momentum. The internet tells me that there is no such thing in sport but I watched Andy Robinson score the greatest goal of all time at home to Millwall the week before Stockport and I knew, we all knew, that we were safe right then.

A week before today I was playing pool in Hekyl & Jekyl, singing Birkenhead Soldier, as we slumped away to Leyton Orient. Dead as a dodo that night.

But you pick yourself up. I’m nothing if I’m not an optimist.

I’m seven hours ahead of BST (Birkenhead Summer Time) here but a combination of over enthusiastic friends and my working hours mean by the time I awake one of the lads has already tagged me and 97 other faithful SWA into his pub breakfast we are staying up status.

I do what anyone would do. Pull on my black away shirt. It’s years old now, but I’ve not done replica kits for quite some time. And hey, Chris Greenacre played for us when we wore this one. Man I love Chris Greenacre.

Family Mart across from the hotel does a bottle of Rum for 106 pesos. That’s about £1.24 at this point, throw in the Pepsi Max for 59 pesos and you’re on a winner. Whatever happens they are going to be needed.

I settle by the pool for a bit, back at the hotel. Top joint this place, to be more than fair. Chat with a mate via iMessage for a little while. He’s a City fan, season ticket holder. Top lad but not old enough to properly remember their suffering in the late 90s so as much as he knows what it’s like to truly care, he’d be the first to admit he doesn’t really know how I feel.

I send out a snapchat of myself kissing the badge. SWA 4 LIFE. I make a status on Facebook wishing the lads all the best, wishing I was there. The missus has already made one expressing her sympathy for me being so far away on this occasion. She gets it. Top bird.

Couple of light refreshments after a quick dip in the pool. Must have eaten at some point though it’s passed me by if I’m honest. Meet a colleague in the hotel bar. Then a taxi to some sports bar. He’s been here three years so I’m trusting him that it’s decent.

In all honesty my original plan was to be alone tonight. Twitter and whatsapp are pretty much my only resources. Maybe if I knew how to work things a bit better I’d have access to some commentary. That Tranmere Player subscription I never did get was maybe a good idea after all. But hell. The bar has wifi, I’m assured, so twitter will work just fine, I can constantly refresh for the live updates and the screens all round me will be playing various 3pm Prem kick-offs that quite frankly do just not matter.

And this is how I’m following this game. This massive game. By keeping my finger swiping on a micro-blogging app. Jesus. I don’t know whether to laugh or cry.

But Goody is the skipper. Last game for us? How could anyone not love that man. Birkenhead Soldier.

My mate, best man at my wedding, tries to Skype me in like the 3rd minute. It wouldn’t connect. Unfortunate as I would have seen our goal live.

COME ON YOU WHITE BOYS

Crewe, though. What actually is the point of them since the top clubs all developed world class academies? Apparently their goal killed the atmosphere at Prenton Park stone dead.

Junior Brown, man. Had seemed a prank signing. Then he scored that goal against Shrewsbury. A clincher, a survival goal! A genius. One of the great signings. Sent off on the half hour mark. Well, this gets worse.

So at half-time we are down. It’s okay though, we only need Preston to score two or Oldham one. We have a lot of love and mutual respect for those clubs so I am sure it will work out fine.

Crewe are two up fifteen minutes into the second and I am far more than two San Miguels up. I’m starting to worry a little bit. It’s weird, I feel so powerless. And yet, how would I feel any more in control were I at the match? For even if in some illogical way I feel that watching us would give me that sense of ease, it’s not really about us at this point.

We’re still leading though. But Crewe. Seriously what is your problem? 2-0. Nice one Preston. Seriously, John Welsh, this ain’t funny.

So it’s Oldham or bust. We’ve always done our bit for the Merseyside-Manchester thing. I would have stopped supporting my country had Allardyce ever got the England job (don’t laugh, he was interviewed for it once upon a time), because, well, Bolton, you know. I can’t pretend Oldham inspire quite the same feelings in me. There is no hatred like that of a young man, after all. But to hell with them, to hell with the hole in the roof of their away end, to hell with the fact it is always cold there. To hell with Joe Royle and to hell with the reaction they used to give Ronnie before our lot started giving it to him worse.

So all that being said. Please god Oldham. You know you want to. Nobody wants Notts County to stay up at our expense, surely?

That Adam Lockwood eh. What a champion. Oh yes. I knew you’d do this for us. This is why I never followed the youth, never dreamed of putting you on that Bolton pedestal.

I’m asking my colleague what shot he wants to have at full time to join me in celebrating. Man, to be in Birkenhead tonight.

Seven minutes. Seven minutes of joy. Mind you, it’s about five more than I got at Wembley in 2000.

But where there is faith, there is light and strength. I don’t know who Alan Sheehan is but his penalty equaliser is not the end of the story.

There is only one thing for it. I tweet ‘COME ON YOU MANCS’

Evidently Adam Lockwood doesn’t quite get it as he sees red.

I’m getting all of this from twitter. To be fair I feel more informed than I do on games I watch. A reflection on the way I watch football, perhaps.

Another three minutes have passed and of course Bradford have equalised. Well, why wouldn’t they?

So all we need now is for us to score and Oldham to score. Or us to keep it at 1-1 and Preston to score three times.

Somewhere amongst it all we concede another. The Preston goal that comes is about as relevant as the stat our fans constantly reel out about Stockton’s goals per minute compared to Cassidy.

Full time goes and our twitter feed tells me we are down. I excuse myself to the toilet.

“Try not to cry,” my colleague says. If he didn’t like footy I might find it insulting, instead he’s saying what I’m thinking.

I watch Everton-Man City in numb shock. Think that Barkley geezer scored a peach and Everton lost. Could tell you little else.

Get back to my hotel, pour a rum and coke. Launch myself on the bed, and yeah I’m drunk but now I let it all out.

I think about 4th December 1992. Aldo and Pat Nevin ripped West Ham apart and we went second in the old 1st/old 2nd/Championship. We were on a trip to the moon.

What happened boys?
Thanks to Martyn Corrin for this